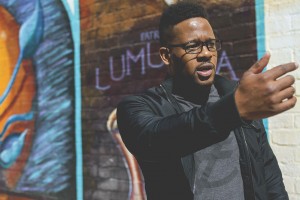 On this episode of The Jam we have emcee Open Mike Eagle. Mike is a Chi-town native that made his way to LA after college.  What started as a short stay before graduate school turned into a permanent West Coast residency and he became affiliated with the illustrious Project Blowed. Project Blowed was a place where many emcees from all over LA gathered to hone their skills as performers. Mike had a similar space like Blowed in Chicago called The Point; but, he soon saw that the West Coast way of emceeing was very different. He’s become part of various crews in LA, most notably Swim Team and Hellfyre Club, and is set to release his next album Dark Comedy on June 10th. In this podcast we talk about his hometown of Chicago, psychology, and his style of “Art Rap”.
Other topics include: Lime-A-Ritas, categorizing Hip Hop, economic segregation in Chicago, Camp-Lo, Ski Beats, and sexy album covers.