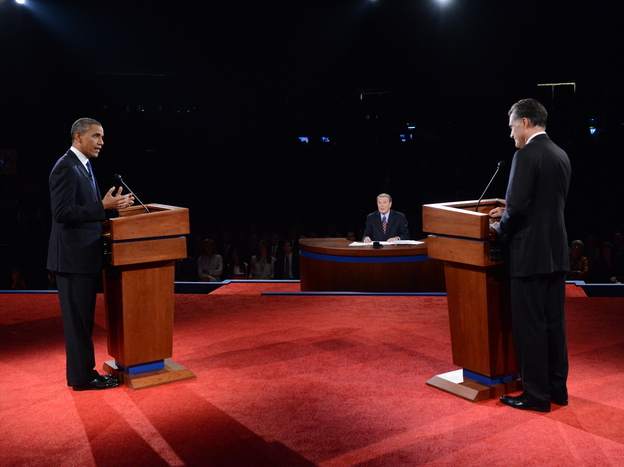 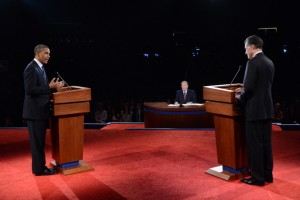 President Barack Obama and Governor Mitt Romney have now had the first of their much anticipated (by me anyway, and my fellow political junkies) presidential debates. The winner? Well, Governor Romney by a landslide according to the polls and almost all the commentary from Democrats and Republicans, black and white. It is rare when a political party acknowledges it’s own presidential candidate’s defeat. Republicans at least made a cursory effort to suggest George W. Bush won his first (disastrous) debate against John Kerry (it should give hope to Obama supporters to remember that Bush came back to win that election) even if it seemed obvious that they knew otherwise. But every Democrat not working directly for the President seems to have declared their own man the loser; an astounding blow to Obama’s prestige and his intellectual reputation. And I agree; the president lost badly. He was sluggish in his comebacks, listless in his delivery, unable to hold Romney’s gaze and lacking his famous confidence during the most important debate of his career. Romney on the other hand was focused, direct, unhesitating (with better posture no less) and perhaps most importantly, looked directly at the President almost the whole time, conveying a willingness and eagerness to challenge the champion and to take his crown. In other words, Romney came to win, and it seemed like President Obama didn’t even want to play.

But with all this talk of style and delivery (which is very important in politics) it is unfortunate that what is lost in this is a stricter focus on the substance of what the candidates had to say. And on issues of substance, though I agree more with the trend of Mitt Romney’s comments, the truth is that the debate was much closer to even if anyone bothered to pay that close attention. Mitt Romney spoke with force and conviction about his tax plan, and was persuasive in saying that the President had mis-characterized it. Where Obama called it a 5-trillion dollar tax cut skewed towards the rich, Romney claimed adamantly that this was untrue, that by closing loopholes and deductions he would insure that the rich paid the same overall amount of taxes, while the middle class and small businesses would pay less because of reduced rates. To that Obama lamely cited some studies supporting his view and repeated, again without any energy, that that this was “math” and “arithmetic” (quoting Bill Clinton) and that Governor Romney could not do what he said he would do without either raising middle class taxes, or increasing the deficit. All of Romney’s replies to this were forceful and effective…and yet, President Obama was almost certainly correct. There are only so many loopholes and deductions available to be cut, and while they number in the hundreds of billions of dollars, Mitt Romney’s tax cut numbers in the trillions.That is a problem. Romney fills in the blank by saying the difference in revenue will come from growth, but while his approach may well grow the economy (I think it will), it’s a big “if” as to whether he can grow it so much that his tax cuts will essentially pay for themselves. So then what does he do if and when they don’t? Increase taxes? Or let the deficit rise? Obama basically said this, but he did not drive the point home. He hesitated, looked down, speaking without fighting. As a result nobody saw that Obama was on to something. Nobody noticed.

On Medicare the two candidates again made good points, but only one candidate made them effectively. Romney repeated the claim that Obama cuts medicare by 715 billion dollars, and substantiated it by noting that those cuts come directly out of the compensation the government pays to healthcare providers. If Medicare is to pay 3 quarters of a trillion dollars less to providers to care for Medicare patients (keeping in mind that Medicare already pays less to doctors and hospitals than private insurance…that’s my point, not Romney’s) you can expect far fewer medical professionals to care for Medicare patients, hence less Medicare. Romney’s critique was good, and it stuck. Obama’s counter was also good, substantively speaking. Obama made the point that the voucher program Mitt Romney and Paul Ryan support would cause the most vulnerable seniors to remain in traditional Medicare, ultimately crashing the program (because coverage costs would skyrocket and you would have a smaller pool of people paying into the system…again my point, not Obama’s) and leaving everybody therefore to the mercy of skyrocketing insurance premiums that are already killing us now. Obama’s point was good. But it did not stick, because he did not make it stick. Romney went on as if Obama had said nothing at all, and nobody noticed…including, it seemed, the President.

President Obama missed more opportunities than that. Romney scored big on Obama’s wasteful green energy subsidies, a trap Obama stepped into by talking about oil subsidies which is really small ball stuff compared to the overall budget. But Mitt Romney gave Obama a chance to gain those points back and then some. Mitt Romney claimed that people with pre-existing conditions would be covered under his health care policy. Barack Obama pointed out that that is only true for those who already have coverage and that those who don’t still would lack it, but again he did not press the point. The issue of pre-existing conditions is not just a minor policy distinction. Democrats frequently call Mitt Romney a liar. In this case at least, that’s close to being correct. Romney attempted to suggest that his healthcare policy would do what Obamacare does: cover people with pre-existing conditions, when in fact all it would do would leave things the way they already are. Obama’s actually extends coverage to those with pre-existing conditions who do not already have it, giving them protection that Mitt Romney is only pretending to offer. Obama said that, but he should have shouted it! He should have banged his fist on the podium! He should have looked Mitt Romney dead in the eye without flinching, turning away or looking strangely apologetic as he often did, and made it clear that Mitt Romney was flat out wrong. Instead Romney made the case, without saying it in so many words, that Obama was flat out incompetent, and because he seemed to mean it, what he said stuck while Obama’s case fell flat.

Politics is about substance, about policy, about ideas, but it is also about theatrics and performance, because that is the way you communicate and simplify those ideas into things people can understand. Barack Obama’s brilliance as a politician always seemed to be that he understood this better than anyone else. If he’s going to win re-election, it’s a lesson he will have to learn again. Politics is a battle. Be honorable, be honest as possible, but be real. You cannot win the fight if you don’t fight to win. Mitt Romney knows that. Time will tell if Obama remembers.