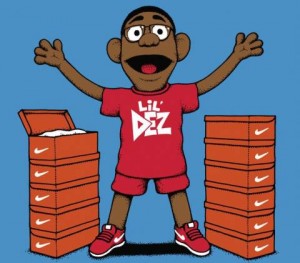 Welcome to The Jam! A show where we discuss nothin but the most jammin-est songs, what makes them the jam, and all the other great things associated with them.
Our first guest is Desmond Marzette, Global Director of Advertising for Jordan. Yes, THAT Jordan. Dez and I talk about how we first met and became homies, his work in the advertising world, and how he became the inspiration behind Lil Dez in Nike’s Kobe VS Lebron campaign.
Some the other topics include: handclaps, twerking, freaking, maxi-singles, dance routines at parties, recording music off the radio to cassettes, and the Black version of “supercalifragilisticexpialidocious”.

It occurred to me one night while watching TV One’s Unsung on The Troutman Family what a major loss the music industry suffered in April of 1999 when both Roger and Larry Troutman left this earth in an apparent murder-suicide. Although the music family that was Roger & Zapp reached their peak in the early 80’s, the classics they created continue to keep parties going and have inspired an entire new generation of musicians to keep their creations soulful and funky.

Hailing from Dayton, Ohio, the Troutman family is an example of a true American success story. With Roger’s talent and Larry’s vision, the Troutman family succeeded in different business ventured, but music was the glue that held the family together. Roger’s signature sound, the manipulation of his voice and other instruments with a talk box, had a major impact on the music group’s success. The talk box was not a new device to the music world, having been used by artists like Stevie Wonder, Pink Floyd, and Peter Frampton, but Roger’s mastery of the device solidified Zapp & Roger’s place in Soul/Funk music history. In current music, the talk box has been replaced with a saturation of Auto-tunes, a device created to correct pitch in vocal and instrumental recordings, though most recently I was happy to hear the talk box properly resurrected in Foreign Exchange’s new album, Authenticity.

Aside from the creation of music that made your body move involuntarily (because anybody sitting down to a Zapp & Roger track is lame) the band knew the definition of showmanship. From live music to audience interaction, Roger and family knew how to get a party going onstage which always kept fans coming back for more.

As today, November 29th is the birthday of Roger Troutman, I’d like to take a moment to honor his memory with a few of my Zapp & Roger favorites. Let these tracks add more bounce to the ounce in your day:

Once again, the legendary DJ A-ski has hipped us to another function. THE MIGHTY SA-RA™ featuring Breezy Lovejoy and Nola Darling bringing their own brand of SOUL and FUNK to ZANZIBAR! There will be additional performances by TiRon, Dame Fifty5,Perfecto and BlackLA

This promises to be an AMAZING night with turntable skills of DJ A-SKI!