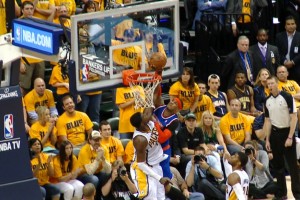 Why is it that we have to discriminate within our own race? It’s not worth it, and frankly it’s getting old. So you’re red, you’re yellow, you’re dark, you’re brown, you’re light, you’re middle class, upper class, low income, the ‘hood, fatherless, motherless, many siblings, or an only child. You’re still BLACK regardless! We are still a minority. Is it even possible to end these divisions based on social status, environment, or skin color? Why are we discriminating against ourselves when we’ve got plenty of people to do it to us, for us.

This stems from recent sports events, and documentaries that have made headline news. Most recently, professional boxer Bernard Hopkins made negative racial comments towards professional football player and star quarterback, Donovan McNabb. If you haven’t heard, Bernard Hopkins criticized Dovovan McNabb for “not being black enough”. Hopkins compared McNabb to a house slave and compared himself and others to field slaves. He goes on to say that McNabb was “the one who got the extra coat, the extra servings”. “You’re our boy”, Hopkins reminds McNabb,  saying “He thought he was one of them (a white person). His final shot at McNabb?  Claiming McNabb just has a suntan and isn’t really black.

of-bounds. This is why many people from other races say that blacks always play the race card and bring up racism. Of course Hopkins comments are ignorant and just plain stupid, but this isn’t something that myself or other blacks in America haven’t heard before.

I recall being in college and in the military hearing whispers from other black males, saying I was not acting the way a black guy from LA or “the hood” should act. Even in high school, I would get rejected  by many of the girls who thought I was funny, but not ‘gangsta’ enough. I would always get put in the friend zone by a lot of the black women. It seemed like the more trouble a boy got into, the more they were loved by the ladies.

But getting back to Mr. Hopkins, you sir should have more common sense then that, take personal accountability, and know that there are millions of young ears who hear these words, and at the same time look up to sports figures such as yourself.  One sports writer, Bomani Jones, may have said it best about the boxer: “I don’t know Bernard Hopkins, but I do know that he gets hit in the face for a living.” Known for his very laid back demeanor, when asked for a comment about Hopkins, McNabb replied “SERENITY NOW!”

Even people were critical of Barack Obama when he was running for president in 2008. There were many people saying that he was mixed and he wasn’t black enough and wasn’t really black because he had a great education.

Muhammead Ali even called Joe Frazier an uncle tom in the 1970s because he didn’t struggle like Ali did.

The problem with Hopkins, Rose and Ali is that they feel like blacks have to grow up poor in a struggle only to rise up out of it. In this generation, they are a ton of blacks that grow up in middle-class or even rich lifestyles and there is nothing wrong with that.

I could rip Bernard Hopkins for saying these comments, but many people on television have already

done that. I believe we have a bigger problem on our hands: the constant criticism of black people who were raised differently from ourselves. Instead of learning about others we make assumptions, confirm them for ourselves, and then wag a disapproving finger at the “other”.

It starts within. You have to know who you are, and where you come from, historically. Respect it, so that you can grow and welcome all blacks and appreciate our differences, because it’s what make us, US!