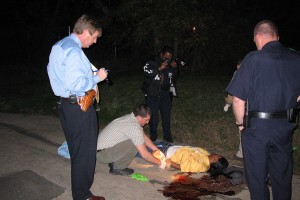 I cannot stand A&E’s television show, The First 48. Every time I tune in all I see is black-on-black crime and black folks in trouble with the law. The First 48 is another cop-based documentary filmed in various cities in the United States. The show allows the viewer to see the real world of homicide investigations. Police departments give A&E an all-access pass inside the murder cases under investigation and showcase detectives using forensic evidence, witness interviews, and other advanced detective skills to identify suspects.

This show is reality television plain and simple, with crime sensationalized in typical media fashion, and the media always reports on crime that happens in or around urban areas. The First 48 goes deeper because the show not only sensationalizes crime but also exploits the disproportional figures of blacks caught up in the criminal justice system. It reminds the public that most of the violent crimes committed are by black offenders and plays on the reported statistics that indeed show that black offenders commit most violent crimes. Or are they?

According to homicide statistics released by the FBI in 2009, the number of reported homicide cases for that year showed that black offenders were at 5,890 while white offenders were at 5,286. The difference is not that significant.  So why does The First 48 continue to show black-on-black crime? It is possible that the producers are unaware because they don’t care to know the statistics, but I’m convinced the show is racist. Even on A&E’s website other viewers notice and comment on the disparity of black crime always being shown. Look where they always film.

Every time I tune into the show the cities usually featured are Detroit, Memphis, Louisville, Birmingham, Kansas City, Dallas, Cincinnati, Philadelphia, Atlanta and other surrounding cities in the southern most region of the United States. So these are the cities police departments that have allowed The First 48 to film and if you want to document crime statistics you have to start with the inner city. But for eleven seasons The First 48 has exposed it’s viewers to black-on-black crime and that is seriously disturbing.

The south has a large black population and Detroit is a major black urban city. The producers know this, yet they continue to film in these areas and continuously expose the viewing public to violent crimes committed by black offenders. If it is not a deliberate attempt by the shows producers to demonize black people then what is it because to the average viewer who is unaware and who always sees black-on-black crime on the show is going to think that black people are by nature violent offenders of the law. Crime and punishment and how it affects the black community is one of the most sensitive issues and for The First 48 to constantly expose and document it leads me to believe that the producers deliberately want to make black people look bad.

It’s really sad to see how this drama plays out to. I’m sure the cops aren’t telling the suspects they are interrogating that they are being filmed as they go along with their attempts to pit one person against the other in the classic game of the prisoner’s dilemma. I really love when the white detectives can’t get anywhere with the black suspects so in turn, they send the black detective in to try and relate. The black cops then breaks the whole situation down while trying to come across as a friend to a suspect who comes to realize how much of a mess he is in.

Controversy and bad press in recent years made some police departments have elected not to allow The First 48 to film. The Detroit Police Department was in the news after a raid gone wrong for a suspect they were looking for, which was being documented by The First 48. A stray bullet went through the window right where 7-year-old Aiyana Stanley-Jones was sleeping on the couch hitting her in the neck, where she shortly died thereafter. Detroit police were tipped that the suspect in a shooting case went into the Jones’s residence and who was later caught at a different address.

Federal law prohibits camera and television crews to be present in a suspects’ home and the debate will continue on the presence of television crews with police officers. Louisville’s police department also pulled out of The First 48 because of an incident that reported the wrong outcome of a shooting suspect in question on the show.  The suspect was actually released from custody due to lack of evidence, but the show aired that he was still awaiting trial.

Controversy plus bad press equaled by lawsuits is a deadly equation And that is probably the only way The First 48 will be cancelled. Maybe that is the only way the producers will listen is with a string of bad publicity and lawsuits. Enough is enough with the black-on-black crime A&E.

No crime in American history– let alone a crime that never occurred– produced as many trials, convictions, reversals, and retrials as did an alleged gang rape of two white girls by nine black teenagers on a Southern Railroad freight run on March 25, 1931.  Over the course of the two decades that followed, the struggle for justice of the “Scottsboro Boys,” as the black teens were called, made celebrities out of anonymities, launched and ended careers, wasted lives, produced heroes, opened southern juries to blacks, exacerbated sectional strife, and divided America’s political left.

Nine black youths are indicted in Scottsboro, Alabama, on charges of having raped two white women. Although the evidence was slim, the southern jury sentenced them to death. The Supreme Court overturns their convictions twice; each time Alabama retries them, finding them guilty. In a third trial, four of the Scottsboro boys are freed; but five are sentenced to long prison terms.

I had to go back to the drawing board on this situation. My initial instinct was to have a WTF reaction – not at The Boondocks’ spoof of the Latarian Milton – but at the boy himself.  After all how many 7-year old children have the absolute nerve to steal grandma’s car and go on an under-age driving rampage AND not be publicly reprimanded by somebody? Not many.

But I realized that within my reaction came a criticism – about my people, this child, and ultimately myself as a parent. Too often I find Black folks blasted in the media for ignorant behavior, and instead of pointing another finger, I want to understand why THIS boy is getting so much face time. Is it because a 7-year old stealing a car is truly something out of this world? Or does Latarian represent something greater? Instead of using Latarian as an example of why and where we must improve as a people, let’s ask ourselves what is it about this boy that makes him commodifiable. After all, if he’s getting face time on TV, he’s getting paid. To dissect this, I must reorient how you view his video footage, so here goes.

First, here is the real news story that introduced us to Latarian Milton in April of 2008:

The first thing that struck me about this video is Latarian’s honesty. From this brief interview we learn there is an issue with mom, grandma is raising him, and there is no mention of Latarian’s father.  Keep all of these factors in mind and keep watching.

How did the news find out about this? Did Walmart call the police or is the media stalking Latarian Milton?

Here is another interview with Latarian in June of 2008. Notice his tone and body language, and really listen to what the cop says at the end:

By now Laterian is tired of explaining why he took grandma’s car. It’s such an obvious cry for attention that it doesn’t warrant repeating. Notice how the reporter plays up Latarian’s disregard for the people who he could have hurt that day and how that leads into the cops’  admission of  pressing charges to “get him into the system” because “obviously this is unusual behavior for a 7-year old” and little Latarian needs to be evaluated and treated. I’m wondering, what is Latarian’s fate if at 7 he already has a record and is being labeled as a danger to society?

Now, Latarian stays in the news, but this time it’s because he’s about to make his Hollywood debut. Are Judge Judy’s ratings that low these days? Notice how the reporter mentions the show’s producers encouraging grandma, Latarian, and the phantom mom to participate. How much of that encouragement do you think came with pictures of dead presidents on it? But again, what is the point of all this? Why? To help Latarian “get a new life, and move on” as he desires? I’m frustrated with grandma because she let those dollar signs speak to her – her smile says it all.

This year, Latarian was launched onto Comedy Central. (Couldn’t embed the link thanks to copyright, but PLEASE click on Comedy Central!)

I’m all in for a good laugh, but really what is the point of this 7-year old boy teaching this grown white man how to do hoodrat stuff? What does that even mean? And when Latarian really does grow up and tries to make a name for himself, will he be able to come out from under the “hoodrat” umbrella? Or do we already believe and accept that this child is not capable of being anything other than just that?

Thankfully Aaron McGruder and the Boondocks team saw something in Latarian, and more importantly in the media representation of Latarian, worth commenting on:

I can get behind what I believe McGruder’s intent is here. It’s pretty ludicrous to mislabel a child as a sociopath when the child is clearly begging for attention, but by doing so you write the child’s future for them. Through one really awful and childish mistake, Latarian spent his 15 minutes as the “hoodrat” representative. His real mistake – stealing the car – seems so small in comparison to him teaching Tosh.0 how to really be a hoodrat two years later. And as for grandma participating in that sketch? No disrespect to the elder, but she could take a lesson from Boondocks’ Grandpa and not spare the rod.