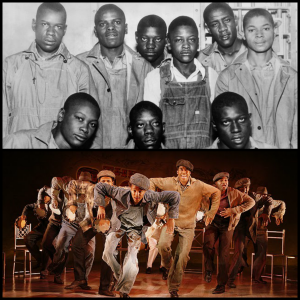 Listen in as KC and the family discuss their recent field trip to see the controversial musical, The Scottsboro Boys, based off of the 1931 historic incident in Scottsboro, Alabama. Podcast guests include Chris Lehman, Arian White, and Tash Moseley. Williams met George Walker in San Francisco in 1893 and the two formed what became the most successful comedy team of their time. They staged several vaudeville shows and full musical theater productions, including Senegambian Carnival (1897), The Policy Players (1899), The Sons of Ham (1900), In Dahomey (1902)…their biggest hit, Abyssinia (1906), and Bandana Land (1907). When George took ill and retired in 1908, Bert continued working and shared his earnings with him until he died in 1911.

Williams achieved great success performing in many of the Follies’ productions, making as much money as the president of the United States by playing a character that could best be described as the black counterpart to Charlie Chaplin’s Little Tramp. During summer breaks, he traveled to Europe and studied with the great French pantomimist Pietro, who, according to Williams, taught him that “the entire aim of art in the theater was to achieve simplicity.” In 1918, Williams discussed comedy as he understood it:

“All the jokes in the world are based on a few elemental ideas….Troubles are funny only when you pin them down to one particular individual. And that individual, the fellow who is the goat, must be the man who is singing the song or telling the story….It was not until I could see myself as another person that my sense of humor developed. For I do not believe there is any such thing as innate humor. It has to be developed by hard work and…I have studied it all my life.”

Bert Williams’s last show, considered one of his best, was Under the Bamboo Tree. Williams died in New York City on March 4, 1922 after contracting pneumonia while touring with that production in Detroit.  He was the original comic who never got any respect, an individual of great personal dignity who was never allowed to show it on stage.