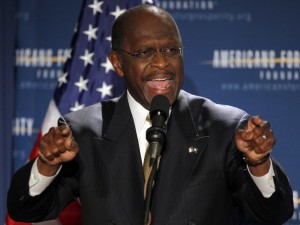 Who is Herman Cain? I would wager that most people, maybe even most black people, did not know before a couple weeks ago. Heck, maybe most still don’t know. But for those who are paying attention he has quickly emerged as a fascinating figure on the political landscape and an increasingly significant one.Two and a half years after this nation swore in it’s first black president (an event thought nearly impossible by a majority of black-Americans just a year before)  it is just possible that it could happen again.

The successful former chairman and CEO of the Godfather’s Pizza chain, and a fairly popular political voice in conservative circles since the early nineties, Herman Cain has much more than that to boast of in terms of accomplishments. In fact, the life of the self-made Georgia millionaire (born in 1945) reveals a long list of impressive achievements: he graduated from Morehouse with a Bachelors in Mathematics in ’67, he graduated from Purdue with a Master’s in computer science in ’71 (while also working as a ballistics analyst for the Naval department at the same time). He then went to work for Coca Cola as a computer systems analyst, then found himself working for Pillsbury, whose President soon entrusted Cain with the responsibility of revitalizing 400 Burger King locations in the Philadelphia area, (the least profitable restaurants in Pillsbury’s recently acquired Burger King chain). Herman Cain turned them into the most profitable Burger King locations in only a few short years. As a result of his success, Cain was appointed President and CEO of another Pillsbury subsidiary: Godfather’s Pizza, which he also turned from a languishing company to an ultimately profitable chain. He resigned that position in 1996. He has also served as the deputy chairman and the chairman of the Federal Reserve bank of Kansas City in addition to being a  political columnist, talk radio show host and Baptist Minister. Perhaps most incredibly, Herman Cain is a survivor of stage four colon cancer. He and wife Gloria have two children and three grand-children.

That Herman Cain is smart and accomplished there is no question. That he is a relatively viable presidential candidate, while this was an idea easy to dismiss even several weeks ago, also cannot be doubted. For a peculiar combination of Herman Cain’s own talents and resourcefulness in addition to a unique set of political circumstances in the Republican party has allowed Mr. Cain (who has proven himself  a galvanizing speaker and an increasingly powerful debater) to emerge, at this stage in the race, as the definite number two candidate (and not too far behind number one contender Mitt Romney at that). The lack of an obvious champion among Republicans and the mistrust many Tea Party Republicans have of former Governor Romney in addition to the slow motion implosion of Texas Governor Rick Perry’s candidacy has left Cain as the most appealing alternative to Republican voters hungry to see some one with the right strengths and values confront not only President Obama, but to some degree the Republican party establishment itself. This is Herman Cain’s hour and it will be interesting to see what he does with it.

So the question that remains is what should black people think of him? Being a Republican myself (though not quite so conservative as Herman Cain) I have no problem with his running for the GOP nomination, in fact I think most black people would be proud of his success just as we were and continue to be proud of Barack Obama. But Herman Cain represents a strain of political thought that is well outside the mainstream of most black political philosophy. Not for Herman Cain are the wonders of the welfare state. Though he has offered few specifics in this regard, it seems clear that he is ready to drastically cut federal spending on public and entitlement programs while initiating his catchy and controversial “9-9-9” tax plan, drastically cutting income taxes for not just the rich but for all Americans, yet simultaneously significantly increasing consumption taxes which would have a disproportionately negative affect on poorer and middle income Americans, blacks especially. This stands in stark contrast to the policy preferences of President Barack Obama, who has made clear that he wants to raise taxes on the top income earners in this country in an effort to preserve as much in the way of public benefits as he can. Who is right? Public spending does a lot of good for black Americans who are traditionally disadvantaged in terms of educational and, consequently, economic opportunities in this country and thereby wind up needing some assistance from the government to get by.  But on the other hand, no amount of public welfare can replace the value of having a job, not just in terms of earning potential but in terms of self-esteem and real psychological value. President Obama’s policies have thus far not succeeded in dramatically reversing the downward spiral of American employment in general and black unemployment in particular. With the large sums of money that would be freed up for investment and consumption for most American’s by the 9-9-9 plan, it is just possible that a real surge in job creation might follow under Cain where it has thus far failed under Obama.

What Cain would and could do as president of course is mostly hypothetical. We do not yet know him as well as we will have to to understand just what type of leader he might prove to be when the pressure is on and in any event, it is still not likely that he will be able to overcome the advantages of big money and political experience that his chief rival Mitt Romney possesses. Even so, if we are honest with ourselves and each other, the example of Herman Cain should give us some reason to smile. He is another shining example of what our people are capable of when we believe in ourselves and our abilities. You do not have to agree with his politics to see that, in this respect, he is every bit as much a role model as Barack Obama. Whether he can win the Republican nomination, much less the presidency, much less still the support of a broad number of African-Americans is an open question. But the case is closed on the ability of the man. Love him or hate him, Herman Cain is a force with which to be reckoned.