Welcome to the first episode of The Brothers Lehman Podcast, with Chris & Jonathan Lehman. We discuss the upcoming games this weekend in the NBA Playoffs, the future of the Chicago Bulls and the Atlanta Hawks, and Jonathan Vilma’s lawsuit against Roger Goodell. Leave your opinions and comments at thebrotherslehman@gmail.com. 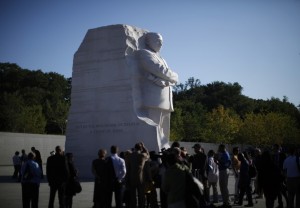 When the brothers of Alpha Phi Alpha, Inc. set their mind to a thing, they get it done and it was in 1983 when five members, George Sealy, Alfred Bailey, John Harvey, Oscar Little, and Eddie Madison, developed the idea that would be the greatest undertaking in the fraternities’ history. It took 28 years, but finally last August a statue created by sculptor, Lei Yixin, in the likeness of Dr. Martin Luther King, Jr, was dedicated on the National Mall in Washington, DC., a location reserved for past presidents of the United States.

Thousands gathered at the National Mall last August for this historic event and to celebrate the greatest posthumous tribute to Dr. King’s life and legacy. Here are a few highlights from that glorious weekend:

Stevie Wonder discusses his visit to the monument.

Bernice King speaks during the dedication.

Julian Bond at the MLK Dedication.

Cicely Tyson discusses the unveiling of the memorial.

Al Sharpton at the MLK Memorial.

Diahann Carroll Reflects on the life of Dr. King.

Andrew Young at the MLK Dedication.

Thank you Dr. King for your tireless sacrifices! You remain in our hearts and minds every day, for we know we would not have come as far as we have without your efforts!