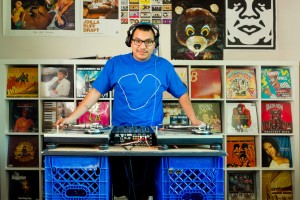 Whattup! We’re back with another episode of The Jam! with guest Val the Vandle. Val is really a fixture in the LA scene. I first knew of him about seven years back when he began a showcase night called The Spliff. I knew of him as a DJ and he had put out mixes. I also know that he taught at Scratch Academy, but that was about it. He was most known to me as one of the faces that put on The Spliff showcases. Around this time, the West Coast indie scene grew enormously, especially through the rise of blogs, Myspace, and YouTube as promotional outlets. Some of the best known artists that came from that period was U-N-I, Pac Div (who Val often DJed for) and Diz Gibran (another artist Val DJed for). Things were in a serious swing at this period as The Spliff became host to many new DJs and emcees, and audience members could flex their photography skills, freestyle outside (I saw Nocando rip a guy apart there once) and young people hungry for new music could chill.
Since then, Val has become one of my mentors in DJing and has shared a lot of his wisdom and skills. In the midst of all this he has also been working on a documentary about the flourishing of Hip Hop in the Internet Age called “The World Is Yours”.  While the desired amount has been raised on Kickstarter, more funds are still needed for the post-production, music licensing, marketing, etc for the doc. Please be sure to visit www.yotheworldisyours.com to watch the trailer for the film, and send in donations for the only documentary that seems to be tackling the new crop of musicians that are being especially cultivated in the Internet era. Aside from that, we talk about Val’s upbringing and how he started DJing, his work on Soundwaves Radio, and the kind of integrity and self-awareness necessary to be a good DJ.
Other topics include: tequila, high schools in LA, songs that need to die, and groupie love for DJs.
You can find Val the Vandle on Twitter at @valthevandle