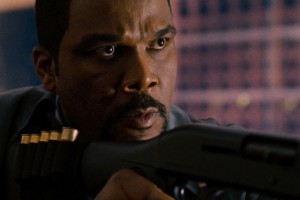 So, I went to see Alex Cross a couple of weeks ago with one big question in my mind: can Tyler Perry play an action star? Is he a good enough actor to go beyond his roots as a comedic, cross-dressing cultural icon, beyond his expanded repertoire of competent (non-Madea) dramatic roles like he played in Good Deeds, to succeed in a role altogether different? Can he take his already ubiquitous brand to even greater heights, opening up a whole new world of Tyler Perry murder-mystery roles that could lead him to be more than Tyler Perry, to be an actor of the caliber of a Morgan Freeman or Denzel Washington in the categories of thrillers and suspense? These things I wondered. And after seeing Alex Cross, I came away with the most disappointing answer possible: I don’t know. And I don’t think we’ll ever find out.

Alex Cross was a bad movie. I mean, if I had seen it on USA at one in the afternoon on a Monday when I was too sick to go to work and too bedridden to do anything but watch day time television, it would have been passable. But having spent twenty dollars on me and my wife’s tickets I left the theater struggling to think of some justification to ask for a refund. Alex Cross is supposed to be a detective known for piercing insight, an almost unfailing ability to perceive subtle details in mysteries and crimes that those around him miss, making him a formidable adversary and a compelling character. But there was little subtle or compelling about this film. Alex Cross is introduced as a uncannily gifted police detective (the film is a prequel to all the other stories where he works for the FBI). His partner even calls him “Gandalf” as they step onto the first crime scene of the film (and then explains to Alex that it means he’s a “wizard,” as if either he or the audience should need help figuring that one out). To this end one of the opening scenes of the film shows Cross in a cuddly moment with Mrs. Cross (played by the enchanting English actress Carmen Ejogo) where he deduces everything she had done that day by looking at her lipstick, observing the vague marks on her clothes, smelling her perfume, etc. It’s the old Sherlock Holmes routine of course, which would have been fine if it were not the most clever thing Alex Cross did in the entire film. The mystery itself is simple and boring, complete with a killer who leaves pictures at his crime scenes containing clues as to his next victims (they call him “Picasso“) and a wealthy (*spoiler alert*) potential victim of the killer who winds up having been his financier the whole time…(not surprising given that there are literally no other characters in the film who might possibly be the mastermind behind Picasso’s killings, making what was supposed to be a surprise a flat anti-climax).

Worse still however was so much of the dialogue. Most of it was forced. Cross’s monologue to his partner and chief of police (played by John C. McGinley of Scrubs fame; an odd choice for a film that was already at risk of not being taken seriously because of it’s lead actor) analyzing the psychology and the motives of their killer is awkwardly timed and riddled with cliches. His first conversation with the killer (which immediately precedes the most ridiculous sequence of events in the film, which I will leave unspoiled for those who still wish to see it) devolves into a boring and obnoxious exchange alternating between him trying lamely to psychoanalyze Picasso, bragging about his own skill as a detective and then throwing a tantrum, all of which leave the character looking unsophisticated and unimpressive (granted this is supposed to be Cross before he becomes the Alex Cross but his behavior is totally at odds with the way his character is introduced). Other parts of the dialogue just weren’t realistic, not because of the way they were acted, but because the dialogues themselves were nonsensical. Towards the beginning of the film Cross reveals to his partner that he’s been offered a job with the FBI, that comes with a 35% pay raise and a comfortable station behind a desk (hinting at his later station with the FBI). But he’s afraid to tell his wife about this because he knows she won’t like the idea (which a little later she doesn’t). What is the problem that arises when they have the conversation? Despite the fact that her husband would be making a lot more money and, more importantly, would no longer be getting shot at in the line of duty working dangerous city streets, she doesn’t want him to take the job because she doesn’t want to take their kids out of their school in, of all places, Detroit. Yeah, not a realistic conversation.

The film has one redeeming point however; small roles by Jean Reno and Cicely Tyson, great actors, don’t do much to make the film any better, but Matthew Fox actually plays a magnificent villain as Picasso. It doesn’t save the movie, but to the extent that it is watchable it is because the films antagonist actually does manage to be authentically creepy, sadistic and frightening.

But what about Tyler himself? I can’t say that he did poorly, because the film was so poorly written it is hard to know whether it was Perry’s acting or bad scripting that was the problem. He certainly isn’t able to lift this script up, but perhaps with better lines he might have been pushed into really discovering an authentic Alex Cross character. Maybe. But unless Perry is willing to gamble with his own resources to take another shot at it, I doubt anyone else will put up the money to give him another chance.