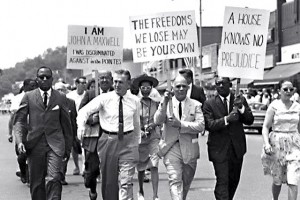 It is interesting to note that in America’s first election involving a black president that it is not the president who possesses a family legacy in the Civil Rights Movement, but rather his white opponent, former governor Mitt Romney. In the early 1960’s, relatively few prominent politicians took a bold stance in favor of full integration and equal rights between the races. One of the few who did was Republican Governor George Romney, of Michigan.

At the age of sixteen Mitt Romney was going door to door in Detroit on behalf of his father’s gubernatorial re-election campaign, soliciting support not just for his father but for his father’s pro civil rights agenda. It was a hard sell in many cases. While the Republican Party of the sixties was not necessarily anymore opposed to civil rights than was the Democratic Party, if not a bit less so, there were many segregationists in the GOP and in Michigan who were infuriated at George Romney’s support of the movement, and with some justification; many who had voted for him were unaware of his support for the cause until a picture was published of him marching shoulder to shoulder with Detroit NAACP president Edward Turner and hundreds of other whites and blacks through a suburb of Detroit, protesting housing discrimination. (Martin Luther King, Jr., who encouraged Romney to run for president, led a march the following day which Governor Romney declined to attend only on account of it being the sabbath.) He received angry communications from constituents who had voted for him, calling him a “Judas to the people who voted for you, and a “dead-duck” for re-election in ’64. Anger at Romney however did not only come from voters in Detroit; he also experienced it at the hands of the LDS (Mormon) church, of which he was a respected leader. The church itself was segregated at that time, and at least one prominent leader accused Romney of supporting “vicious legislation” vis-a-viz the 1964 Civil Rights Act that seemed to rebuke the churches teachings on black people. While Romney felt religious duty bound him not to criticize the church publicly, he nevertheless believed in a more liberal interpretation of Mormon doctrine with respect to blacks and pushed for that view within the church (a view that ultimately prevailed upon the churches integration in 1978). In the wider world of politics however he was free to speak more boldly, going as far as to refuse to endorse his party’s nominee, Barry Goldwater, for president in ’64 because, as he told Goldwater himself, he feared his campaign would “make an all-out push for the southern segregationist vote in the south,”.

George Romney did more than pay lip service to the issue of Civil Rights. As Governor he enacted controversial policies that benefited the black community in Michigan, and ultimately across the country, though he never achieved the level of success he desired. Taking office as Governor in 1962 Romney declared: “Michigan’s most urgent human rights problem is racial discrimination,” and then promptly set up the first civil rights commission in Michigan’s history. Later on, as Richard Nixon’s Secretary of Housing and Urban Development, Secretary Romney crafted the Fair Housing Act, moving new HUD housing programs to become increasingly desegregated, to the increasing anger of some whites. But politics, especially within the Nixon administration, soured Romney on the ability of Government to achieve significant reforms on behalf of civil rights, and Romney increasingly sought to convince the black community that they could turn to the private sector, to businesses and non-profits, to help solve their problems. But blacks were highly skeptical of this approach, and so Romney in time came to seem naive to the black community, just as his zeal for civil rights in the first place increasingly ostracized him from the growing social conservative base of the Republican Party. He retired from politics in 1973, and enjoyed more satisfaction heading up volunteer organizations as a private citizen. He died in 1995.

George Romney was a champion for civil rights, a man who might have been president, who lost more than he gained politically because of his stand. What, if anything, his legacy tells us about Mitt Romney’s character and his commitment to helping the black community as a President of the United States is of course an open question. But it is worth recognizing that there have been politicians in times gone by who took a stand for social justice in America, and that Mitt Romney’s father, George Romney, was one of them.