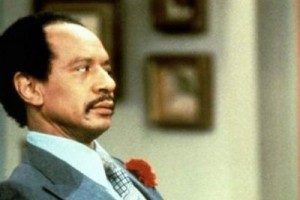 For us 70’s babies, Sherman Hemsley was as large of a superstar as one can get. His iconic character of George Jefferson was imprinted in our brains as kids as the first Black millionaire showcased on primetime television. Although his walk, his wife Weezy’s voice, and his famous arguments with their maid Florence were synonymous with the show’s fame, the image of a Black man who owned a chain of dry-cleaning businesses and therefore was able to “move on up” had an impact on all of us. During the era of sitcoms like Different Strokes, What’s Happening, and Good Times, The Jeffersons gave us a peek into the experience of being Black and wealthy.

Beyond The Jeffersons, Hemsley’s work ethic was something to admire. He moved on to the hit series Amen, playing the role of Deacon Ernest Frye. Beyond that he remained in our view, often pairing up with his former co-star, Isabel Sanford, in commercials for brands such as Denny’s and Old Navy, until her passing in 2004. Every few years after that, Hemsley would appear in guests spots in both film and television, culminating with voiceover work for the hit animated series, Family Guy.

We lost an icon in our community yesterday at the age of 74 and of natural causes. I can say that having lost so many within this last decade to drug addiction and other unsavory circumstances, I admire Hemsley even more for maintaining his health to the best of his ability, and leaving behind the legacy of a stellar and consistent acting career. I don’t recall ever hearing his name tied to any scandals or smeared with bad press, and perhaps this is why he continued to work steadily in an industry that takes its toll on so many.

Thank you, Sherman Hemsley, for sharing so much of your time here on Earth with us. You will be greatly missed.