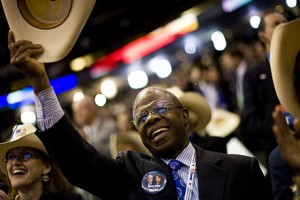 The thing that most drives African-Americans away from the Republican Party today, if one excepts the perceived Republican opposition to civil rights, are deep and fundamental differences in economic and domestic policy.  Given the long disadvantaged socioeconomic station which blacks have historically occupied it is easy to see why the public spending policies of the Democratic Party would have an enduring appeal to the many of us who are poor, struggling, and who need help where we can find it. But just because a certain set of policies may have an appeal to the poor and the working class does not mean  these policies are as beneficial as we would think. For an emerging black community coming into it’s own as business owners, college graduates, innovators and professionals, a different philosophy must begin to take root, one that allows us the means and the opportunities to control our own destiny as independent individuals, as secure families and as an increasingly prosperous community.

In recent days, former Republican Speaker of the House and current presidential candidate Newt Gingrich has made headlines, and met with fierce allegations of racism from some, for saying at a campaign stop in South Carolina, “The African American community should demand paychecks and not be satisfied with food stamps.” His words made the blood boil of many progressives generally and many blacks particularly, but it is worth curtailing the emotion to at least acknowledge the legitimacy of the point. As President Obama himself has acknowledged, there are a segment of people, and surely we observe them in our own community, who are content to live off of the public dollar as long as they can without making a serious effort at sustaining themselves. Naturally this doesn’t characterize our community as a whole, but what is more broadly true is that even for the large majority of black Americans who work hard for a living or who are trying their best in this difficult time to be able to provide for themselves and their families, there is a sense that true social mobility for us in this society is mostly a bitter mirage. Therefore we think education won’t help us. We believe that corporate America will not accept us. We expect the legal system to hinder us. In our history there have been many reasons to feel this way. But in the 21rst century too many of us cling to these limiting attitudes even as the walls of institutional oppression have crumbled around us before the advance of the black condition and the opening up of American society. For all of our problems and even given the current economic climate, black Americans are more wealthy, more educated, and more influential in recent years than we have ever been before. Yet instead of tending towards policies that would open wider the gates of our opportunities, we support initiatives designed to make sure we will fall only so far.

There is a reason that perhaps the steepest historical decline in the black unemployment rate occurred as a result of the tax cuts of Ronald Reagan in the 1980’s. There is a reason that even with cuts in investment taxes and welfare spending black unemployment reached a historic low at the end of the Clinton presidency, to only be neared again under George W. Bush’s presidency as a result of, in my opinion, the Bush tax cuts for the upper and middle class. (We’re it not for the real-estate crash and the financial collapse the national unemployment rate would probably have remained under 5% for sometime.) These periods of high employment and increase of black wealth and American wealth and employment generally came not as the result of aggressive government spending and public assistance. They came as the result of people being able to save, spend and invest more of what they had earned. There is a psychological difference of course in being able to keep more of what you yourself own or produce as opposed to simply receiving for free of what has been taken from the pockets of others. People have more appreciation for what they earn than for that which is given them without effort. Like the song says, “God bless the child who has his own.”

That is not to say that food stamps and welfare are innately bad. For the many people who are trying hard in tough times to get by and who have nothing else to rely on (believe me I know what it’s like) it’s important to have this safety net. But growing the social safety net does not grow long lasting prosperity, which is what needs to happen if things are to genuinely get better. It has been the approach of the current administration to funnel money directly into state governments, pet projects and rebates in order to stimulate economic growth. And while it should be noted that a good deal of this massive spending came in the form of tax credits, these were temporary and insufficient to generate real economic growth. Meanwhile as we spend money with little restraint, the very funds needed to fund our social welfare programs are missing because the economy is languishing. Raising taxes on the wealthy and cutting defense spending can barely begin to cover these bills. It is only economic growth that can accomplish this.

One area where President Obama deserves more credit than he has gotten is in the area of education. For as willing as many of us are to roll in the mud over the issue of Affirmative Action, the affirmative action we should all be calling for is stronger performance on behalf of our children from an education establishment that rewards seniority over ability. Consequently our children suffer while the teacher’s unions protect themselves. We keep pouring money on the education problem, but study after study have shown that government funding does not impact student achievement and neither, in fact, does class size. What matters most is not funding, or surroundings, but teacher quality. We have only been subsidizing the mediocrity of a failing union culture. President Obama has at least shown the political will to say to the left wing teacher’s unions that performance should be the deciding factor when it comes to retaining and rewarding educators. This is a conservative sentiment that Republicans have fought for for some time, and it’s unfortunate that more Democrats have not voiced support for at least this element of the President’s educational agenda.

I do not believe that black Americans will long be content to accept government programs as more than a nominal factor in ensuring the welfare of our people. I do not believe that black Americans will long tolerate an educational system that has no expectations for our children. We as a people do have a higher sense of who we are and what we can accomplish. But the interests of the Democratic Party are largely served by our dependency on federal dollars and our belief in the illusion that the poverty of our surroundings prevents us from being able to learn. These are a couple reasons why some of us are Republicans. But it doesn’t matter whether one is a Republican or Democrat. What matters is that we look at the example of an exceptional black Democrat like Barack Obama to realize the wisdom of a great black Republican like Booker T. Washington, who said that “character, not circumstances, make the man,” and furthermore, that “we should not permit our grievances to overshadow our opportunities.” We have the ability. It is only the embrace of freedom and opportunity that we need to able to succeed.