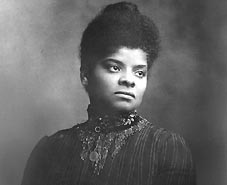 Ida B. Wells was an African American journalist, and newspaper owner that was an early leader in the civil rights movement. She documented the problem of lynching in the United States. She was very active in the women’s rights and women’s suffrage movements, establishing many women’s organizations and touring nationally to speak about them.

Quote: “I had an instinctive feeling that the people who have little or no school training should have something coming into their homes weekly which dealt with their problems in a simple, helpful way… so I wrote in a plain, common-sense way on the things that concerned our people.”

Important civil rights issues were addressed thanks to Ida, and as a result, many of these issues have been banned. She was a stepping stone for women’s suffrage and women’s equality.

Side note: She raised hell for W.E.B. DuBois in the NAACP because she felt there were too many white women and not enough black women involved. Black Women salute!

One Reply to “Black Is: A Day In Our History”