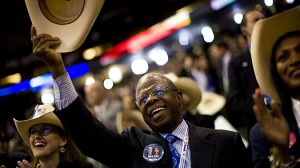 There is an interesting psychological phenomenon that persists in black politics and in African-American society generally; one that has stubbornly bore down roots since at least the early seventies and beyond. It is a striking manifestation of identity politics that has gone too far for too long, retarding the political, and arguably the socioeconomic, growth of black America. That phenomenon is the near totality of our people’s unyielding devotion to one political party, our correspondingly bitter and intractable opposition to the main alternative,  and the anti-intellectual and, frankly, hurtful dismissiveness with which the large majority of blacks who pay allegiance to one  party treat the small minority who hold with the other. What I am referring to is, of course, the now longstanding black reliance on, and attachment to, the Democratic Party, and our longstanding opposition to, and reviling of, the Republican Party. This, believe it or not, is not a good thing. The potential progress of black America in the twenty-first century will be essentially capped until we outgrow this ideological bigotry.

I say ideological bigotry because that, for far too many black liberals and democrats, is what their opposition to conservatism and Republicans generally, amounts to. You see it expressed in film, stand up comedy and on the street level. Republicans and black Republicans particularly are portrayed as greedy, naive, uncle Toms, etc. That’s no way to characterize people we disagree with. But furthermore this ignores the broader history of the Republican party and the historical relationship it has had with the black community.

Let’s begin with the origins of black animosity towards the Republican party, for which there is a legitimate cause. Only a minority of black people nowadays seem to know or remember the fact that the vast majority of black Americans were Republicans all the way until the late sixties. That ended with the polarizing divisions wrought by the battles of the Civil Rights Movement and then with the adoption of the “Southern Strategy,” a term then popularized by prominent GOP strategist Kevin Phillips, who described it thusly:

“From now on, the Republicans are never going to get more than 10 to 20 percent of the Negro vote and they don’t need any more than that… but Republicans would be shortsighted if they weakened enforcement of the Voting Rights Act. The more Negroes who register as Democrats in the South, the sooner the Negrophobe whites will quit the Democrats and become Republicans. That’s where the votes are. Without that prodding from the blacks, the whites will backslide into their old comfortable arrangement with the local Democrats.”

There was then in the late sixties a vast constituency swap, whereupon black Republicans almost en masse became Democrats and southern (mostly middle class) white Democrats became Republicans. Given that this were the case one might be tempted to think that the Republican party must have fought tooth and nail against the Civil Rights Act and the movement towards integration, but the truth is far more mixed. The greatest political opposition to the movement came from southern white Democrats, who would eventually become Republicans. At the same time western, mid-western and northern Democrats like John Kennedy, and some southern Democrats (particularly President Lyndon Johnson) were on the side of racial progress and President Johnson in particular showed great courage in pushing the Civil Rights Act through congress. (Johnson knew that to sign the bill would be to, in his own words, “sign away the south for fifty years,” but he did it anyway.) The support of Democrats like Kennedy, Johnson and others in congress and across the country gives Democrats a viable claim to much of the success of the Civil Rights era. Still, in congress roughly 80% of Republicans voted for passage of the bill in both the House and Senate, as opposed to roughly 60% of Democrats in the House and a little less than 70% in the Senate. The triumph of civil rights was a bipartisan triumph therefore, but in congress there was more unified support for these landmark changes among Republicans than Democrats.

There are other positive things to be said about the Democratic Party and it’s historical relationship to African-Americans. Thurgood Marshall, the first black Supreme Court Justice and a champion of civil liberties, was a black Democrat. Adam Clayton Powell, the first black congressman in New York’s history and the first from any northern state outside Illinois since reconstruction, was a Democrat (served 1945-1971). But Martin Luther King, Jr., the single most important figure in the Civil Rights Movement, was a Republican and an active one at that. He endorsed Richard Nixon for the governorship of California in 1964, something that is not widely known. Furthermore, he encouraged the presidential candidacy of the anti-segregationist Republican governor of Michigan, Governor George Romney, who was of course the father of Mitt Romney, ironically the man who is favored to carry the GOP banner against Barack Obama this year.

Abraham Lincoln was a Republican, and although some  have cast doubt upon the legacy of Lincoln as the “Great Emancipator,” the fact remains that he legally freed the slaves and that he  was always an abolitionist, as most Republicans were. Frederick Douglass, (to whom Lincoln bequeathed his iconic walking stick upon his death), was a Republican and even received a vote in the electoral college for the presidency (obviously the first for a black American). Every black elected politician and appointed official was almost certainly Republican during the reconstruction era. That changed after the Civil Rights Movement reached it’s zenith in the sixties of course, and after that a strong faction of segregationists did emerge in the Republican Party because they came from the Democratic party (invited in by cynical GOP strategists and political elites). Even so, it was Ronald Reagan who signed Martin Luther King, Jr. Day into law, and while he probably did not really wish to do so, then Vice-President George H.W. Bush fought hard behind the scenes to see its passage and ultimately both parties voted for it by wide margins.

Black Americans have always had a home in the Republican Party. Those of us who have remained in it or returned to it should be respected, I feel, for to us it is not just the party of Reagan, but the party of Lincoln, of Douglass, of Booker T. Washington, and of King.

One Reply to “Defending Black Republicanism (Part 1 of 3)”