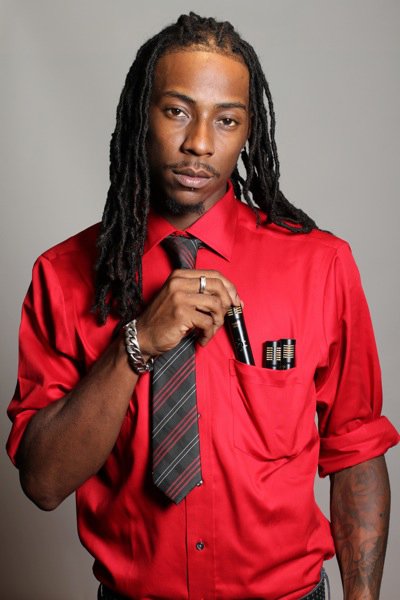 It’s a beautiful day in the neighborhood, a beautiful day indeed. But this Mr. Rogers wears no knitted sweaters and has no puppets for house guests. That is of course unless they are holding his sticks. Black Is contributor, Mr. CEO  recently conducted an exclusive interview with Bennie Rogers, drummer extraordinaire. In our constant quest to find interesting individuals who are passionate about life, their craft, and the uplifting of others, Bennie tells us more about himself.

State your name and where are you from for our readers?

My name is Bennie Rodgers II and I’m from Planet Briight Red.. Look it up!

HAHAHA, ok Briight Red. So what is Black to you?

Black to me? Black beauty, Black is more then just a color, Black stands out among others. I’m “Black” in a sense.

Which instrument(s) do you play?

I play the Drums, the Kazoo, the Washboard, the Triangle and the Accordion. I also do a mean Hambone!

We may have to start a Kazoo and Hambone traveling band.

When and why did you start playing?

I started playing drums at the age of 3. My mother taught me how to play, when she figured that I could clap on beat better than most adults.

What drew you to playing the drums?

I came up in a musical family. My older cousin was a really good drummer and I wanted to be just like him when I was younger. Drums was one of the most interesting instrument I’ve seen played, or was ever exposed to, at such a young age. I felt as if I could express myself in a different way, on “the kit”, so I kept at it.

Tell me more about your family, were they musical?

My Family is VERY musical. From my Grandfather, down to my baby brother. Keys, Drums, Vocals, Trombone, Accordion and of course I fit in playing the Hambone!

Sounds like the term, one band, one sound was the everyday way in your house?

What was the first tune you learned on “the kit”?

Hmmm, the first tune I learned was a song called “NICETY” by Michel’le. I performed that song at my 1st grade talent show… AND WON!!

Which famous musicians do you admire? Why?

Which famous musicians, if any, have you learned from?

I learn from EVERYBODY I come in contact with. The lady at the Burger King drive-thru is nice with some spoons.

Who are your favorite artists growing up? And today?

What, no Tone Loc?  OK, were you influenced by any old records & tapes?

Yes, I was influenced by old tapes and CDs when they first came out. I couldn’t always remember what my parents were playing, but I know it felt really good. From Gospel, to old RnB, to Pop, and even Jazz. It all played a BIG part in the in my life and made me the musician I am today 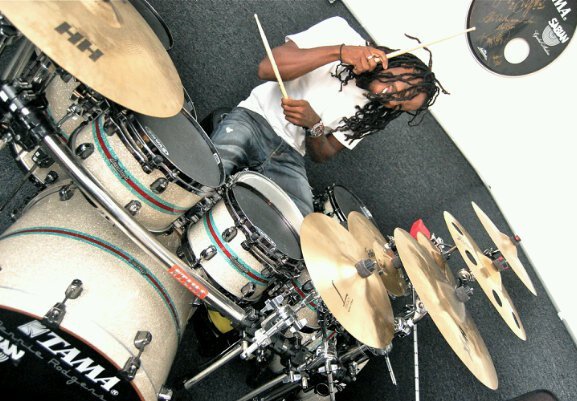 In what ways does the place where you live (or grew up), affect the music you create, or your taste in music?

I’m originally from Oakland CA, and a lot of my early musical influences come from there. Older Gospel, all the way to Tower of Power and Stevie Wonder, Luther Vandross. Well, I moved around a lot, and changing schools and making new friends, introduced me to different forms of rock, jazz, RnB etc.

What are your fondest musical memories?

One of my fondest musical memories was the day I first started playing in church, and I got a chance to play behind my mom, who was leading a song. It was such a warm feeling, like, “Man, that’s my mom up there ripping and I’m playing the drums for her”. Another memory is when I first got the gig with Mariah Carey. Those 3 – 4 years all together, with that band, was such a great experience.

Right now the saddest song to me is “Dance with my father again” by Luther Vandross. I can only think of my Grandfather when I hear this song, I used to love to dance to it around the house.

Did you attend any musical academy or college?

I attended M.I. (Musicians Institute Hollywood) back in 2005. I made some of the best friendships, and musical relationships, while I was living there for a few years.

Have you been in competitions and/or won any prizes, other than that 1st grade Nicety rendition?

I sure have! I won the Carlos Vega Memorial Scholarship drum competition in 2006, while in school at M.I. That was the biggest competition that I’ve won, thus far.

So how has your music evolved since you first began playing?

Since I first started playing, the music that I create and play has evolved VERY much! As I become more exposed to different people and environments, mu sic constantly matures and becomes more refined.

Do you write or compose any music of your own?

Yes, I write, compose and arrange all different types of music.

How do you handle mistakes during a performance?

Well, that’s what rehearsal is for, so that if you do make a mistake, you can recover and its not real noticeable to the audience. But, if I mess up, I usually have a big smile on my face and just keep going.

Do you get nervous before a performance or a show?

I don’t get nervous anymore, I just get really excited and bring my energy up, on stage.

What’s the craziest thing that ever happen on the road or while performing?

The craziest thing to happen to me, has to be throwing up ON STAGE, in the MIDDLE of a high energy song. It was so embarrassing, that I hate to talk about it.

Safe to say you have to travel a lot? What’s life on the road like?.

Yes! My job consists of traveling quite a bit. Life on the road is very interesting. It’s always a new adventure.

Do you ever attend any jam sessions? What makes a good session?

I like jam sessions. It’s a way for me to get out of that “touring box,” and hear some good music and great musicians. What makes a good jam session is the vibe, the environment, the music choice, the musicians, and the energy the audience gives off, when they’re as in-tune with the music .

Do you still practice? How often and for how long?

I practice as much as I can. Lately, I tend to practice during rehearsals, for the artist I’m playing for, or about to record with. However, when I do practice, it’s for a few hours at a time.

Do you teach music?

What advice would you give to beginners who are coming up?

Be humble, stay open to advice, learn how to play a song instead of learning “chops” first, learn the beginning of reading music, and have a great attitude! Nobody likes to be out with a snobby or arrogant musician.

When your not playing music or doing a show, what other things do you do for enjoyment

When I’m not playing music, which is NEVER, I like to be on the GO! I like to Jet Ski, hang with friends, Climb stuff, go out and hear music, be outdoors, go ATV riding or go-kart racing and just have fun overall.

And how do you balance your music with other obligations such relationship or children?

Right now, I’m single with no kids. When I was in a relationship, it was hard because that person wasn’t completely on my team, they didn’t understand my job. I guess it could’ve worked if you have trust, and a great deal of understanding. Coming from a musicians standpoint, at my age, establishing my business, and brand Briight Red, my team and my career is what’s most important to me right now. I’m 26 having a BALL!

In 5 to 10 years, I see myself as a mogul. I would like to be a role model for other musicians, young and old. I see myself acting, modeling, maybe owning a restaurant, who knows! All of this could happen with in a year or two, so 5 – 10 years from now, I might be running a music school on the moon!

How can your soon-to-be-fans gain access to your music? Do you have a website with sample songs or a demo CD or videos?

All of this will be on my website soon @ BrIIghtRed.com

Is there anyone you’d like to acknowledge for offering financial or emotional support?

I want to thank my entire family, they ALWAYS had my back and I love them for that. I also want to thank my close circleof friends (you know who you are), my team BrIIght Red, my business partner and brains Aisha Duncan, all the company’s who endorse me and gave me a chance, my mentors Gil Smith, Brian Fraiser-Moore, Eric Daniels and Mike McKnight. And most of all I want to thank all of my FANS around the world!!! That’s where a lot of my inspiration comes from you show me a lot of love.

Any current shows, gigs, or performances coming up?

YES! I am currently on the “I Am Still Music” tour 2011 with Lil Wayne. I’ll be playing behind Keri Hilson. We are coming to a city near you so watch out!!

Follow me on twitter @WhosBennie and @BrIIghtRed or Youtube. Currently I’m working on some great music to put out for you all, so stay tuned.. Be Blessed

Thank you Sir, this was entertaining!

2 Replies to “Give The Drummer Some!”