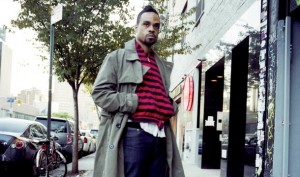 I can easily recall the first time I saw Bilal perform. It was at the start of the new millenium and he was the opening act for Erykah Badu at the Universal Amphitheatre. I sat there in amazement at this man with locks, big glasses and an even bigger voice that captured the attention of the room. Vocally captivating, Bilal was hitting notes that only Mariah Carey could rival; lyrically, he brought the house to our feet when he sang “Sometimes”, a song so honest and steeped in truth that it would be one of many standout tracks from his debut album, 1st Born Second. That performance solidified my place as a Bilal fan, and every performance since then has kept me in tune with what he’s up to.

His second major album Airtight’s Revenge was also packed full of soulful, honest tracks – and was heavily anticipated since it was well-publicized that a previously recorded album, Love For Sale, had been shelved indefinitely by his label, Interscope Records, after being leaked online. Now Bilal is back with his third major release, A Love Surreal, a more acoustic, still brutally honest album where Bilal shares his joy and pain with us through song.

Listen in as I chat with Bilal about the creation of this new album, his gifted storytelling through song, and the impact the Internet and social media have had on his career. Enjoy!