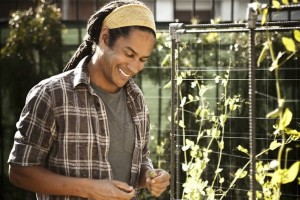 Acclaimed chef and author Govind Armstrong became a Lehman household name a few years ago after our introduction to him via Bravo’s Top Chef. I was totally fascinated by the black man with the long locks who appeared as a guest judge, and searched to find out more about him. I was in awe to discover that he was the protégé of Wolfgang Puck, and started working in his kitchen around the age of 13. It was then sheer luck to discover that he had, at that time, a restaurant in my city called the 8 oz Burger Bar and we made plans to check it out. After the first visit, I was a fan. In a whirlwind of gourmet burger spots, 8 oz offered up something special as far as my palate was concerned, namely a turkey burger with bacon and collard greens. Don’t knock it till you try it – it was Thanksgiving on a burger. 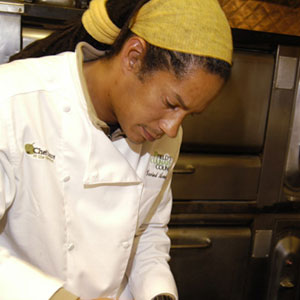 You can then imagine my elation when during the gentrification of my beloved Baldwin Hills Crenshaw Plaza I learned that Govind,
along with business partner Brad Johnson, were opening a new eatery called Post & Beam around the corner from me! I visited during its soft opening and was happy that this type of California Cuisine was now available in my neighborhood which is inundated with fast food places. I felt the food was fresh, the flavors amazing, and just like before I fell in love with a comfort
dish that reminded me of the holidays: black-eyed peas with yams and bacon. That dish alone guaranteed I would be a repeat customer. Even more, it was great seeing Govind at the helm – watching him in the kitchen was gratifyng, as I knew he was a chef who truly cared about what his customers consumed.

Listen in as Govind and I discuss his introducton into the culinary world, the vision and evolution of Post & Beam, the importance of growing one’s own food, and why there aren’t more black chefs in his field. Enjoy!