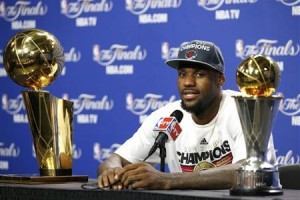 Miami Heat’s LeBron James sits with the Larry O’Brien trophy (L) and the Bill Russell NBA Finals MVP trophy during a press conference after his team won the title by defeating the Oklahoma City Thunder in Game 5 of the NBA basketball finals in Miami, Florida, June 21, 2012. REUTERS/Sarah Glenn