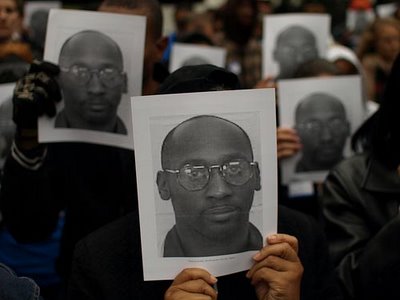 Troy Davis was convicted of murdering a Georgia police officer in 1991. Nearly two decades later, Davis remains on death row — even though the case against him has fallen apart.

The case against him consisted entirely of witness testimony which contained inconsistencies even at the time of the trial. Since then, all but two of the state’s non-police witnesses from the trial have recanted or contradicted their testimony.

Many of these witnesses have stated insworn affidavits that they were pressured or coerced by police into testifying or signing statements against Troy Davis.

One of the two witnesses who has not recanted his testimony is Sylvester “Red” Coles — the principle alternative suspect, according to the defense, against whom there is new evidence implicating him as the gunman. Nine individuals have signed affidavits implicating Sylvester Coles.

An execution date for Troy Davis is scheduled for this Wednesday, September 21, 2011! In the days before Davis’ execution, the Georgia Board of Pardons & Paroles will hold a final clemency hearing – a final chance to prevent Troy Davis from being executed.

An execution is NOT inevitable.  This merely sets the clemency process in motion.  Before Sept. 21, the Georgia State Board of Pardons and Paroles will rule on whether Troy Davis’ sentence should be commuted, or whether the execution should be carried out as scheduled.  Previously, the Board stated that it would not allow an execution unless there was “no doubt” as to guilt.

Please sign the petition to save an innocent man’s life by clicking on THIS LINK.